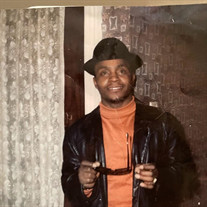 David Starkes was born on June 29, 1944 in Orangburg, South Carolina to his his late parents Freddie and Allinesse Starkes. At a young age David's family moved to Philadelphia, PA where he received his GED. David didn't stop there he furthered his education and enrolled in the Community College of Philadelphia to major in Psychology. Once he accomplished the goal of receiving his Bachelors he kept going and successfully reached his mission to get his Masters Degree to become a Drug and Alcohol Abuse Counselor. He was also a licensed barber. David was a very hard worker and worked for a fishing company for over twenty-three years. He worked construction for a short while until he became an employee with the Philadelphia Sanitation Department and started out as a hauler. David said "I will not walk behind a trash truck for long," motivated he took the examination to become a driver and eventually became a supervisor of License and Inspections until the day of his retirement. David met his long time partner Stephanie Glover and from this union his two beloved children Thelma and David were born. During his time of leisure he loved to watch western movies, listen to oldies and often played card games. Also during his days at home he helped Stephaine take care of their many cats. The cat named Thelma loved climbing all over him the most. His family will fondly remember his dedication, generosity, great cooking and baking skills. He loved children, spending time with his children, grand kids and built a special bond with each one of them. His daughter Thelma would amuse him by calling him dear ole dad as a child whenever she wanted something. He used to call his youngest grand dauaghter MS. CINNIYA and would say "that's my girl, she is something else." He was well known through tout the community, helped others and took care of many people, especially the elderly. Whether you were in North Philly, Northwest, South Philly he was very reliable and to everyone that met him a straight forward and honest person. David was preceded by siblings; Freddie Jr., Joe, Marvin, Ronald, Terrence and his son David. David leaves many to cherish his memory; Common-Wealth-Wife Stephanie, daughter Thelma, his brothers Elvin, Norman, Roddy and his sister Debra; six grandchildren; Davonte, Damir, David, Michaela, Cinque, Cinniya; 2 great-grands; Milana and Jawon; a host of nieces, nephews, cousins and family members.

David Starkes was born on June 29, 1944 in Orangburg, South Carolina to his his late parents Freddie and Allinesse Starkes. At a young age David's family moved to Philadelphia, PA where he received his GED. David didn't stop there he furthered... View Obituary & Service Information

The family of David Starkes created this Life Tributes page to make it easy to share your memories.

Send flowers to the Starkes family.