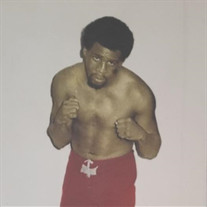 Jimmie L. Savage was born on March 5, 1947 to the late Chrome and Rosa Lee Savage in Tillery, North Carolina. Later, he moved to Philadelphia, Pennsylvania as a young child with his family. Jimmie, also known as "Jimboy" by family and friends, passed away peacefully after a lengthy battle with Dementia on January 2, 2022. Jimmie received his education in the Philadelphia Public School System. While working numerous jobs throughout Philadelphia, he trained as a boxer at the Joe Frazier Gym. He turned professional later in the early 70's. in 1968, he married the late Benna "Bunny" Harvey and from this union they were blessed with three children; a daughter, NaTina L. savage and two sons, Derik D. Savage and Nontesh D. Savage. After retiring from boxing, he volunteered at the National Temple Community Development Corporation. He was later recommended for a citation by the former Pennsylvania State Senator, Roxanne Jones and was presented with the citation by former Representatives Dave Richard and Chaka Fattah for his outreach work with the emergency food and clothing programs. He was later hired for a temporary assignment by the same organization (National Temple) as a Supervisor, for the cleaning/preparation of the area city lots to lay the wiring for cable television. Jimmie, an avid lover of music, could name a song and the artist with just hearing a few notes. He started his day with a hot cup of coffee and the Daily News Paper, which he didn't like to share until he was done reading. Also, he enjoyed watching sports; especially the Philadelphia Eagles and 76er's, representing one of the teams daily by wearing the paraphernalia, Jimmie was dedicated to family and he was a loyal friend. Although, he was very frank, he never had a problem with expressing his feelings and it was all about love. He had an infectious smile and joke often with family and friends. Jimmie will be deeply missed by family, friends, and all who knew him. Jimmie was one of twelve children. He was preceded in death by two brothers, John and Earl; five sisters, Ginger Rogers, Geraldine, Willa Mae, Renee Savage Washington and Aileen James. He is survived by two brothers, Leon and Bernard; two sister, Alicia and Ernestine Bullock. also, Jimmie is survived by one daughter, NaTina L. Savage; two sons, Derik D. Savage and Nontesh D. Savage; four grandchildren, Derika, Dontaya, Nariah, and Naseem; two great-grandchildren, Makaiyah K> Easley and Navi N. Savage; and a host of nieces, nephews and friends to cherish loving memories. a

Jimmie L. Savage was born on March 5, 1947 to the late Chrome and Rosa Lee Savage in Tillery, North Carolina. Later, he moved to Philadelphia, Pennsylvania as a young child with his family. Jimmie, also known as "Jimboy" by family and friends,... View Obituary & Service Information

The family of Jimmie Savage created this Life Tributes page to make it easy to share your memories.

Send flowers to the Savage family.