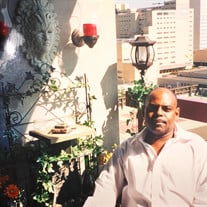 On November 8th , 2020 The Lord our father wrapped his loving arms around our beloved Lawrence Donald Riley he quietly closed his eyes and was called home to eternal rest. Lawrence D. Riley was born in Philadelphia to Arlene (Theresa Riley the first of two sons. Lawrence received his education in the Philadelphia Parochial School system. He attended St. Charles and Bishop Neumann High School. Lawrence was loved by his family and friends and was loving known as "Larry, Larry Love.," Larry could be serious at times, while always fun to be around. Larry expressed at an early age a desire to work, in which his uncle referred him to Rentex, Larry was employed for 8 years, and worked his way up to management. Larry was a dedicated worker always going above the call of duty. Which led to great respect from his fellow employees. Larry met Vanessa Davis at work, from this union they became the proud, loving parents of Lawrence. After the closing of Rentex, Lawrence was determined to find another job, He obtained employment at Thomas Jefferson University Hospital in center city, Lawrence continued his dedication and determination to do his best. He received many accomplishments, he even received a special award from the President/CEO of Jefferson Hospital. Larry worked at Jefferson for 32 years, until his illness prevented it. Larry loved sports especially the Eagles and Sixers, he was well versed on the players and knew every statistic about the sports team, and could recite stats like a commentator. Larry fought a good fight, and now victory is yours. Larry was preceded in death by his uncle Donald Riley. Larry leaves to cherish his memories; his Mother, Arlene Therisa Riley. One Son, Lawrence Davis. One Brother, Thomas Riley (Tommy). One Daughter-in-Law, Halima Davis. Uncles; Dudley, Leonard, Robert, and Frank. Aunts, Rosemary Henssion, Rosemarie, Joyce, and Jerry. A special cousin Linda Johnson raised as a sister. Special Niece and Nephew, Askley and Aaron. Special friends Eric, Vanessa, and John, Sister in Law, Linda. Great nieces and Nephews, Akhir, Ahquil, Aalayah and John. And His Jefferson Hospital family. Rest in Eternal love

On November 8th , 2020 The Lord our father wrapped his loving arms around our beloved Lawrence Donald Riley he quietly closed his eyes and was called home to eternal rest. Lawrence D. Riley was born in Philadelphia to Arlene (Theresa Riley the... View Obituary & Service Information

The family of Lawrence Riley created this Life Tributes page to make it easy to share your memories.

Send flowers to the Riley family.