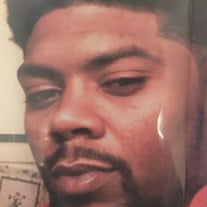 Najee Marquee Cain, affectionately known as "Gee" and "Gee Bug", was born in Philadelphia, Pennsylvania, on October 26, 1992, to Jenifer !. Patterson and John L. Cain. He was the Third oldest of Five Children. He was preceded in death by... View Obituary & Service Information

The family of Najee M. Cain created this Life Tributes page to make it easy to share your memories.

Send flowers to the Cain family.