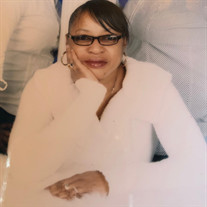 Sally Renee Hart was born September 22, 1959 to the in Philadelphia, Pennsylvania, "Renee" as she was affectionately known as the youngest of eleven On Saturday June 20, 2020 the trumpets sounded, and God sent his angels to to her eternal rest. take Renee "Renee accepted Christ at a young age and was raised in the Catholic faith. Although Renee was born in South Philadelphia She grew up in west Philadelphia and was formally educated in the Philadelphia Public School System, graduating from University City High School. In 1988, she relocated to North Philadelphia ' where she was a pillar in her community. After high school, "Renee" became the mother of two beautiful children, Christina and Christopher. She adored her children and went beyond the call to assure they had everything they needed. From those two children she was blessed with seven grandchildren. She was affectionately known to them as "G". "Renee" enjoyed spending time, nurturing and most of all, loving them. "Sally from the valley", had a heart of gold. Her love was endless. She enjoyed helping others. She loved and was loved by many within the community she served. She was a rock to anyone who crossed her path. She wore many hats Mother, Grandmother, Sister, Godmother, Friend, Drill team coach, Lawyer, Doctor, Chef and therapist just to name a few. She was a dedicated volunteer for the school district Sally started her tenure as a volunteer Parent Scholar before becoming a full-time employee. She gave twenty-three years of service, and retired in 2014 as a NTA School Community Coordinator, earning her Associate Degree along the way. Sally was a member of the Twisters Motorcycle Club for over twenty years before retiring She was affectionately known as the one and only, Brown Sugar. Sally came across many people and formed many bonds. Throughout the years, she was their cook, coach, and mentor. Sally enjoyed life to the fullest. During her time on Earth she lived with no regrets until her untimely death on June 20, 2020. She was preceded in death by siblings, Louis (PeeWee), Juanita (Susan), Fred (Duke), John (Johnny), and Ruth.

Sally Renee Hart was born September 22, 1959 to the in Philadelphia, Pennsylvania, "Renee" as she was affectionately known as the youngest of eleven On Saturday June 20, 2020 the trumpets sounded, and God sent his angels to to her eternal... View Obituary & Service Information

The family of Sally "Renee" Hart created this Life Tributes page to make it easy to share your memories.

Send flowers to the Hart family.