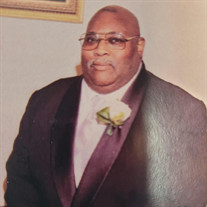 On October 28, 2021, our Heavenly Father called our beloved Ward T. Waddington home to rest in his arms. It is said that a journey of a thousand mile begins with a single step. How do you measure or quantify the trek of a man like Ward T. Waddington? Ward Thomas Waddington was born in Philadelphia on March 12, 1955, the fourth child to James Sr. and Thelma Waddington. His being born into a military family afforded him the opportunity to see the world. From being a military brat to the man he would become, Ward was more than the sum of his parts. He was educated in the Philadelphia School System where he graduated from South Philadelphia High School in 1973. Ward excelled academically and participated in the chess club, football, soccer and wood craving. Ward enlisted into the United States Air Force in 1973 and went into active duty just weeks before his high school graduation. while in the Air Force, Ward served our country as an Administrative Specialist but made his mark as a Military Police Officer and Air Force Honor Guard. Ward served with honor and distinction and on December 1, 1977 was honorably discharged from the military Upon his discharge Ward was employed at the Quarter Masters as a clerk and then retired from the United States Postal Service. In 1980, Ward married Diane Lee and they were blessed with two daughters Vanessa Ann and Michelle Gloria. Being their father was his greatest joy in Life, and he was especially proud of his bonds they created with them as adults. They were like best friends who talked almost daily. He would often boast about just ending his often hilarious phone calls that seemed to be endless. Ward also loved and adored his four grandchildren, Alexis, Lael, Leah and Chad. At the end of his journey, this fallen warrior was something to most and all things to those who knew him best. He took pride in being the eldest surviving male in the Waddington family. Notwithstanding how how much he loved his nephews, he often referred to his nieces as his "other" daughters. He was dedicated to his family and would do anything fo them. In fact, such was his reputation for reliability that he was everyone's emergency contact. He was a blessing to many. Ward was an avid coin and stamp collector and took pride in his collections. He was also a diehard fan of Si-Fi movies and shows such as Star Trek, Dr. Who, Flash and you could find him reading books like Dune. For those left behind, we must soldier on in his memory of kindness and steely determination to overcome any obstacles. In the words of Spock: "Live Long and Prosper" Ward will be greeted in heaven by his beloved parents James Sr. and Thelma, siblings Gloria, Elizabeth, James Jr., Ethelrell, Eugene and granddaughter Dejah. Ward's legacy will be carried on by his daughters Vanessa and Michell, Son-in-Love Lamar, grandchildren Alexi, Lael, Leah and Chad, siblings Kenneth (Nicolette), Janice, Catherine (Darnell), John (Ramona), Karen and Samuel, a legion of nieces and nephews which whom he created special bonds with throughout generation, especially Gavin as they affectionately referred to each other as "Senior" and "Junior". Ward formed brotherly bonds that have lasted over decades with friends like Jose Vasquez, Donald Jones, Wayne Saunders, Harry Taylor and Hakeem as well as a host of family and friends. Our father, brother, uncle, cousin and friend may has left this earth but will leave our hearts.

On October 28, 2021, our Heavenly Father called our beloved Ward T. Waddington home to rest in his arms. It is said that a journey of a thousand mile begins with a single step. How do you measure or quantify the trek of a man like Ward T. Waddington?... View Obituary & Service Information

The family of Ward Thomas Waddington created this Life Tributes page to make it easy to share your memories.

Send flowers to the Waddington family.