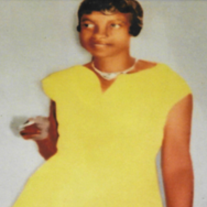 Almeta "Cute" Foster was born on July 17th, 1922 in Pinewood, South Carolina. Her Parents were the William and Elizabeth Lawrence Almeta was raised on a farm where her chores included feeding and caring forthe chickens. She learned how to cook "Hoe Cakes" and rice amongest other foods on an open fire in the yard. Her industrious ways started at an early age. At the age of six, she dragged a one hundred pound cotton sack picking 200 pounds of cotton per day. Although, her formal education was limited to grade 7; she possessed a wealth of wisdom, "Mother Wit", and common- sense knowledge. Almeta loved the Lord, she was raised a Southern Methodist instilling faith and perseverance in all of her children. She was Baptized at Tindley Temple in 1982; while attending Berry Long Memorial Methodist Church where she sang on the Senior Choir. She later joined New Psalmist Baptist Church. Almeta was preceded in death by Emanuel (son), Clamesha (granddaughter), Kenneth, Greg and Marvin (grandson) and Elizabeth (daughter). She leaves to cherish her memory seven children; Beatrice, William, Catherine, Ricky, (Georgeanna), Morris Jr. (Sharon), Claudette and Stephan, twenty-five grandchildren, fifty- five great- grandchildren, seventeen great great grandchildren and a host of friends.
To order memorial trees or send flowers to the family in memory of Almeta Foster, please visit our flower store.