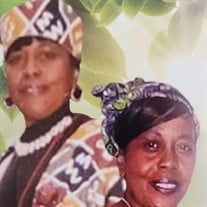 Charlotte was educated in the Philadelphia school system and later attended Wilford Academy of Cosmetology. Charlotte was employed by ABM which merged to Center City District 30+ years.

"Doll Baby" as she was affectionately called by family and friends was a no nonsense, free, kind,, do anything for you, which include telling you off when you're wrong whether you liked it or not, then give you advice with love.

Charlotte's home was the place to go for fun, laughter, music, dancing and delicious food to eat, for she loved to cook. Children were always fed first in her home.

Christmas was favorite holiday. She would decorate her home like nothing you've seen in a magazine. It was all about the children. Charlotte joins her twin Charles L. Brooks, Daughter Rosheena L. Brooks, Daughter in Christ Regina B. Short, grandson Maurice A. Sharpe who preceded her in death,

To order memorial trees or send flowers to the family in memory of Charolette Lorraine Odoms, please visit our flower store.