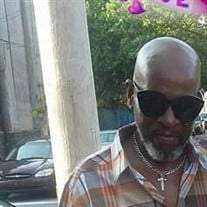 Collie Holden Jr. Affectionately known as "Bob" was born on May 30th, 1951 to the late Collie Holden Sr. and Ellen Holden he was born in Washington, NC.

Bub was known for his trash-talking and being stylish from head to toe, with even colored bandannas to march. Bub was a collector of Nick nats, which he displayed on his dash board or the spokes of his bike, Bub would bring his music out, spark up his grill, and he and his band would dance the night away.

Collie was educated in the Philadelphia Public School System. Collie went into the Military (Navy) straight out of school, he served two terms of active duty. Immediately following he was employed by the City of Philadelphia for thirteen years as a Sanitation Worker, Collie retired from the Philadelphia Water Department on February 14th, 2022.

To order memorial trees or send flowers to the family in memory of Collie Holden Jr., please visit our flower store.