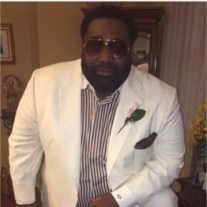 Daryl Robin Jones, affectionately known as "Splash," quietly departed his earthly vessel to be at home with his Lord and Savior Christ Jesus, On Friday, September 12, 2019. Daryl was the fifth child born to Robert Fulton Jones Jr. and LaGracia Henrietta Jones on July 24, 1969. Daryl was born at the very same time that NASA's Apollo 11 splashed down through Earth's atmosphere after an eventful journey to the Moon. Daryl was nicknamed "Splash Down" by the delivering physician. This nickname would stick with him throughout his entire life. Just like those heroic astronauts, Daryl was one who exemplified courage, risk-taking, and an intense passion for life! His dynamic personality impacted every room he entered. He demanded attention, and he got it! In every area of Daryl's life, he SPLASHED onto the scene. Daryl was preceded in death by the Father whom he revered, Robert Fulton "Buck" Jones Jr. and his beautiful and beloved wife Carmella Jones. He leaves to cherish his memory and celebrate his life, his Mother, LaGracia, his daughter Tynesha, granddaughter Bella, brother, Thomas, four Sisters Deborah, Linda, Michelle and LaGracia, a host of nieces, nephews, and cousins, and last but not least friends and acquaintances that are innumerable.
To order memorial trees or send flowers to the family in memory of Daryl Robin Jones, please visit our flower store.