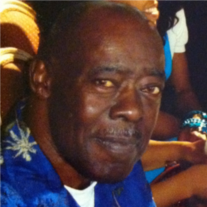 George Lee was born on March 13th, 1942 to Susie Ann Justice and Lee Dorsey in Fruitland, Maryland. George was the 3rd child of her eight children. George was educated in the Accomack County School System and early in his adult life he moved to Bridgeton NJ. A few years later he moved to Atlantic City where he met and married Wilhelmina. He than joined the United States Army where he was a Vietnam Veteran. Later in years he moved to St. Paul, Minnesota where he spent most of life. Here he met and married Angela Girard. During his lifetime George was a man of many talents, he was a chef, a truck drive and maintenance man for the Honeywell Corporation where he worked and retired from for over 13 years. He is survived by 3 sisters; Rose Ann Justice- Smith, Ruby Justice (Leonard), and Elise Justice- Smith, 6 children; Lloyd, George Lee, Georgetta, Quisha , Michael, Deanna, and a host of grandchildren, nieces, nephews, and cousins.
To order memorial trees or send flowers to the family in memory of George Lee Dorsey, please visit our flower store.