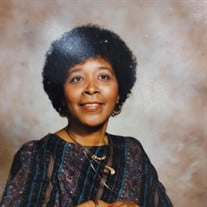 Harriet Howard was born November 8, 1940 in Gary Indiana to the late Mose Williams and daisy Stevens. She was the fifth of five children born to this union.

Harriet accepted Christ as her Savior at a young age and was Strong in her faith. She was a dedicated and devout member of Gospel Temple Baptist Church in Philadelphia, PA where she served as a Nurse until her death.

Harriet was educated in the Gary Indiana School System, graduating from Gary Roosevelt High School in 1959. After graduating she left Gary and moved to Philadelphia, PA to join her father. In 1964, she married Clarence Howard, Sr. and to this union two children were born, Carol and Clarence, Jr.

Harriet was employed by Quartermaster and the Philadelphia Public School System. Harriet was a dedicated employee at Margolis Edelstein which she retired from after an astonishing 20 years.

Harriet was a devoted wife, mother and grandmother; she was also a beloved friend who loved spending quality time talking and laughing with those in her life. she enjoyed sharing stories with her sister-in-law Dorothy ("Dot") Howard and Helen Leonard while enjoying a cup of coffee and eating cake. The three were affectionately nicknamed the Golden girls. Harriet enjoyed speaking with her sister Margaret ("Margie") Hayes on a daily basis. She also enjoyed spending time with her play daughter Yvette Brooks and her friends, Catherine Sprague and Marilyn Shuler-Moore.

On Thursday, March 10, 2022, Harriet heard the voice of God call her name and she entered into eternal peace and rest with her loving family by her bedside.

To order memorial trees or send flowers to the family in memory of Harriet Howard, please visit our flower store.