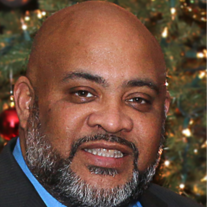 Leslie Andrew Hamilton Jr. (affectionately known as "Les") was born to the late Leslie A Hamilton, Sr. and Shirley Johnson Hamilton on October 31, 1966. Les was Succeeded by his wife Tasha, his 6 children, Aerial, Shadirah, Satavia, Zion, Leslie and Anoah, his mother Shirley, and stepmother Carol, Stepbrother Scott, grandmother, Augustine, 2 aunts and uncles, George and bootsy, and Lloyd & Lois, his best friends George Harris, cousin Doda and a host of other family members and friends
To order memorial trees or send flowers to the family in memory of Leslie Hamilton, please visit our flower store.