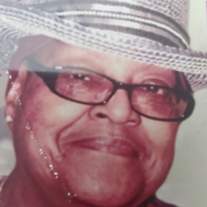 Loretta Juanita Rambert was born to the union of the late Hallie and Dorothy Frank Farrington in Philadelphia, Pennsylvania on December 1, 1936. At an early age Loretta grew to know the Lord. She leaves to cherish her memory her loving husband of 62 years, Charles N. Rambert, son, Michael A. Rambert, her daughter Tandra T. Rambert, and four grandchildren, Sharif Rambert, Malcolm Rambert, Angela Rambert and Lerone Rambert, one sister, Claudette J. Williams and one brother, Allen W. Farrington, one daughter-in-law, Cheryl Seaborn Rambert, one sister-in-law, Patricia M. Farrington, numerous nieces, nephews, godchildren, great nieces and nephews and her special lifelong friend until the end (BFF), Rose Gaughens, as well as a host of other dear relatives and friends. Loreeta was preceded in death by her siblings: Floyd, Dorothy, Donald, Patricia and Russel. She will be missed as a wife, mother, grandmother, sister, aunt, godmother and friend to many.
To order memorial trees or send flowers to the family in memory of Loretta J. Rambert , please visit our flower store.