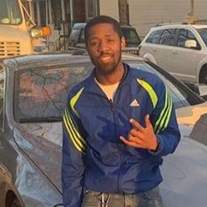 Raymond Canales Jr., departed his life on Monday, June 24th, 2019. He was born on October 8th, 1994, to Andrena White and Raymond Canales, in Philadelphia, Pa. Raymond is preceded in death by his maternal mother, Andrena White. Ray is the youngest of his siblings, Aquill and Tyquill. He was raised by his lovely cousin/mother, Evelyn, and gained two sisters, Yaasmeen, and Nankera. Raymond leaves to mourn: his cousin/mother Evelyn White; one uncle, Vernon White; two brothers, Aquill and Tyquill White; two sisters, Yaasmeen and Nankera French; four nephews, Kha'nii, Jahmir and Kaiden White, and Kasim Henderson; one niece, Kha'Niya Henderson; two best friends Lorenzo and Hanii; and a host of family and friends who will miss him dearly.
To order memorial trees or send flowers to the family in memory of Raymond Canales, please visit our flower store.