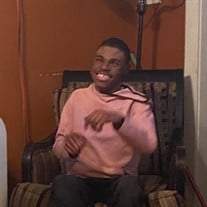 Sharif Abdul Tyson Jr. better known as Mister, was born on January 26, 2001, to Tameka Rogers and Sharif Tyson Sr. For his mother, Mister was an only child and with his father Mister leaves behind two sisters, Alia & Jayda Tyson. Mister (Our miracle baby) was fighter from the beginning. He was born small enough to fit in your hand due to being born prematurely. Mister tongue was too big for his mouth, this led to him having a tracheotomy, he also relied on a ventilator for his breathing. Despite his dependency upon necessities, by no other means was he held down.

Mister was blessed with quite a few nurses throughout his journey. Some nurses we could could not have did without. Respectfully with much love and appreciation. A very special Thank You to Linda Mack, his other mother bless whom Mister had on many occasions experienced "off the clock", love and fun. Mister was blessed to accompany Linda at Disney and other exciting places. Another Thank You to Tanya Miller, who lovely cared for Mister as his nurse. The best nurse however would be his mother. Hands Down. Tameka changed her whole career to ensure he was receiving proper care at all times. Mister survived countless surgeries yet always remained happy and resilient, especially when he had his favorites.

At the age of 7, Mister trach was removed. Although Mister required help for his development he was just as misbehaving, smart and energic as any kid. Because Mister was very particular about who was in his space, you had to know you was winning if you was let in. Mister had a laugh that would suck you in, an energy that would keep you on your feet, an appetite that would have you seeking a second job and a music selection that can turn any moment into a party.

Mister really had an ear for music, he took a liking to the drums at an early age as well as the keyboard. Mister was so musically inclined that he'd notice when someone changed his programmed keys on his board. He listens with his ear very close to the keyboard once he recognized the tampered tune. He kindly reprogramed it back to how he wanted it. It was as if music was his voice.

As he got older he was introduced to head phones, either that or everyone in the doctor's office would be doing the "ugh oh ugh oh" with Beyonce. His ear phones became his favorite things so much that he owned over 1000 pairs, not to be confused with the 3000 glasses that he broke. He loved various music artist and was known as DJ Mister by family.

Mister was as serious about food as he was his music. He would meet you at the table with all the ingredients, don't take too long cause he will attempt to make it himself. He was very laid back when he wasn't messing with you and cracking up about it. Mister was the King and he knew it, as he was a man of comport. Boxers and tee shirt kind of man is what he was, as soon as he hit the door. As soon as he got in from school let the strip show began. Although he didn't care for school in the beginning, thanks to great teacher that soon passed. Mister's educational journey started at Easter seals in 2004. He was scheduled to graduate from high school this June 2022. He was fortunate to have several great teachers and teacher assistants, to name a few Ms. Melanie and Ms. Crews.

To order memorial trees or send flowers to the family in memory of Sharif "Mr." Tyson Jr., please visit our flower store.