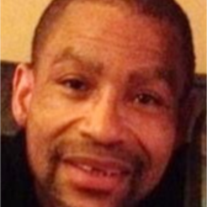 Vincent Keith Wilson, affectionately known as Pocchie, was born on April 27th, 19157 at Pennsylvania Hospital tothe late Ronald K. Wilson Sr. and Dorothy M. Wilson. Pocchie leaves to cherish and carry on his memory: his loving Mother Dorothy Bostis, His (Baby girl)/ Daughter, Dionne Craig; his two brother, Ronald Wilson Jr. and Craig Wilson; his one and only sister Blithe Wilson; his two granddaughters Aminah Craig and Hannah Craig; his three nieces who where very close to him Talia Taylor, Gabrielle Taylor, and Kayla Taylor; the mother of his only child and his special friend Felicia Craig; another special friend, Yvette Harmon, his lifetime friend, who was like a brother, Mark Overby and a host of family and friends.
To order memorial trees or send flowers to the family in memory of Vincent Keith Wilson, please visit our flower store.