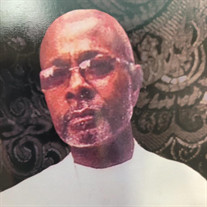 Charles Edward Saunders Jr. was called home on December 17th 2021. Charles was the Eldest son born to the late Charles & Wilhelmina Saunders sr. on February 24th, 1952. He was preceded in death by three siblings: Carolyn, Joseph and Aaron Sr., his daughter; Latifah and granddaughter: Hyneia. On September 5th, 2015 he married Ayesha H. Bey. Charles was educated in the Philadelphia Public School System. He worked for Septa for 30 years as a Bus Operator and Train Conductor which he enjoyed. we have heard some stories doing his 30 years at Septa. His greatest joy outside of dogs and fishing at FDR park (The Lakes) was: Western Movies, Game of Thrones, Exotic animal Documentries and Music, especially BB King, his all time favorite was the Cookouts with his Family and Friends. Charles aka as Charlie Block or Block was a Dapper Dresser, he took pride in his appearance, everything was on point from head to toe there was never a hair out of place even during his illness. He leaves to cherish his memories his wife: Ayesha H. Saunders; three sisters: Brenda Saunders-Tilley, Rosa Owens and Sylvia Pool; one brother: Willard Saunders; 13 Children: Charles and Wife April, Shadiyah and husband Christopher, Talib and wife Tamika, Malik, Raheem and Wife Lena, Tatiana, Gina, Henry, Shakira, Charneese, David, Yasir, Saheed; 27 grandchildren and one great-grandchild, 9 Nephews, 5 Nieces, 3 brothers-in-law & 6 sisters-in-law and a host of family and friends.

The family of Charles Edward Saunders Jr created this Life Tributes page to make it easy to share your memories.

Send flowers to the Saunders family.