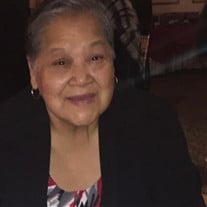 Eleanor Mason affectionately known as "Ellie" was born to the late Pedro Aguilar Sr. & Ethel (Reyes) Aguilar on December 18, 1940, in Philadelphia, Pennsylvania. She was the youngest of 8 children. God gained an angel Thursday morning March 25, 2021. Ellie attended the Philadelphia School System as a child and throughout her teenage years. She was blessed with four children, whom she devoted her entire being too. As a well-known Matriarch in the Tasker Holmes Community Ellie was affectionately called Ellie Pooh, Aunt Ellie, grandma and Ms. Ellie by those she came in contact with. To describe Elie in few words, one would say she was strong, Beautiful, Loving, Giving, Fiery and Feisty. Ellie worked for a short time as a factory worker, and spent years working as a well known bartender in the Tasker Community. Later she joined First African Baptist church at 16th & Christian St. under the leadership of Pastor Terrance D. Griffith. Ellie unselfishly dedicated her life to caring for her children and 15 grandchildren along with a host of extended family members and family friends. Ellie would open her home to whomever was in need of a safe place to stay and a home cooked meal. Ellie's home was a place of excitement and adventure. She would entertain family and friends by hosting holiday gatherings. Oh, how she enjoyed celebrating holidays, making each occasion an extraordinary event. Every holiday she would decorate the house and cook a feast to feed the masses. Staying up into the early hours of the morning preparing delicious Easter treats or wrapping Christmas presents. Ellie's home was always filled with love, laughter and joy. She would spend her days listening to music, singing. cooking breakfast, Watching soap op[eras and playing board games with her grandchildren and occasionally waded in the backyard swimming pool on hot days. Ellie enjoyed spending time with her dearest friend/sister Maxine Singletary (preceded her in death). The two were inseparable. They both shared the love of family, blending two families into one another; as Ellie was lovingly called Ellie by the entire Singletary Family. Ellie loved going to BINGO and playing pinochle, spades, twenty five hundred and pitty pat. During her late years, Ellie enjoyed visits from her grand/great grandchildren, she enjoyed watching gameshows, She enjoyed watching as her children and grandchildren prepared for holiday events as she did before them. Ellie loved spending time with her family, watching basketball and football games, cheering loudly when her team was winning and fussing even louder when they weren't. with her competitive spirit she also looked forward to sharing Sundays with her brother Pedro Jr., niece Donna and daughter Theresa playing pinochle, looking to rub their heads. Ellie proceeded in death by her mother and father 5 brothers, Uldarico & Fernandez Merjudio, Dominador & Salcadore Reyes, Frank Aguilar and grandson Juawann Mason. Ellie leaves to celebrate her memory brother Pedro Aguilar Jr. & Filomeno Aguilar, her son Samuel Mason (Faye), and three daughters Tina Mason,(Rufus), Theresa Mason & Cindy Mason; 14 grandchildren, 30 great-grandchildren and 1 great great grandson; a host of nieces and nephews, cousins, and a village of friends & neighbors.

The family of Ms. Eleanor Mason created this Life Tributes page to make it easy to share your memories.

Eleanor Mason affectionately known as &quot;Ellie&quot; was born to the...

Send flowers to the Mason family.