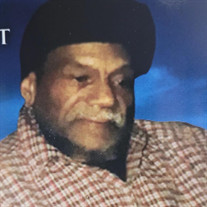 Leroy Washington (Bobby) was born in Savannah Georgia on September 23, 1933. He was the only child born to Bessie Helen Washington. He was lovingly raised by Julia Washington (Grandmother), Bessie Helen Washington (Mother) and Thomas Simmons (Father). He met and married Inez Ferguson on June 18, 1955. From this union they had six children: Gene Lee, Veronica (Vikki), Veonca (Cookie), Helen, (Kim). Ondranette and Leroy Jr, (Bobby). Leroy was United States Merchant Marine Seaman, who served in many wars; including the Vietnam and Korean Wars. He traveled to many countries such as: The Iron Curtain (Russia), Greenland, Sweden, Korea, Germany and Japan. He retired from the United States Marine around 1963 and was hired by the city of Philadelphia's Sanitation Department until he retired in 2005. Leroy was a sports fan, who loved his Philadelphia Eagles. His favorite motto was "I bleed green". He also enjoyed WWF Wrestling Matches and Western Movies. Leroy had astern way of getting his point across and was not one to be manipulated. When you came to him you'd better come correct. As a young child Leroy knew and accepted God as his savior. His belief and trust in God became so evident after the pasing of his wife in 2016. He promised Inez (his wife) that he would continue to take care of and caring for their family. Leroy, kept his promise to Inez (his wife) by actively leading and caring for their family. He loved his wife, children, grandchildren and great-grandchildren. On September 5,2021 Leroy joined his wife Inez and daughter Veonca (Cookie) in Heaven. He leaves behind five children to cherish his memories: Gene Lee (Cora), Vikki (Jeffery), Kim (Clarence), Ondranette and Leroy Jr. (Bobby); fifteen grandchildren, eighteen great-grand children and a host of family and friends.

The family of Leroy Washington Sr. created this Life Tributes page to make it easy to share your memories.

Leroy Washington (Bobby) was born in Savannah Georgia on September...

Send flowers to the Washington family.