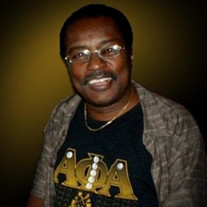 Stephen Vernon Stephenson, The Wiz was a loving, caring, and thoughtful brother, father, and friend that left this world too soon on February 25th, 2021, at the young age of 65. He passed away peacefully in his hometown of Philadelphia, Pennsylvania from complication of Lewy Body Dementia. He battled this disease for nearly five year , and with the love and support from family friends, he showed courage to the end. Stephen was born and raised in South Philadelphia to his late mother, Martha L. Burwell on March 11th, 1955. Stephen married Linda Marie Williams on October 1, 1983, and from that union came their only child Dionne Ja-Lin Stephenson. Educated in the Philadelphia public school system, academics came early to Stephen. he skipped a few grades receiving his high school diploma at 16 from Central High school, graduating with college credit. It was the this prestigious all-buy s college preparatory high school that he found his love from gymnastics and won state competition. A dare devil at heart, he did not restrict his gymnastic prowess to sport arenas. It was common-place to find him doing somersaults down Manton Street. When one of those flips was unsuccessful, landing him face-first on the concrete, he was left with permanent scar but undeterred and worth a great story to tell. His athleticism garner his full scholarship to the university of Pittsburgh. He also attended St. Joseph's University which led him to start a career in banking and finance, and later healthcare billing and collection. It was at the University of Pittsburgh where he found his love for the brothers of Alpha Phi Alpha Fraternity, In corporates. Stephen was Ace on his line when he pledged the Omicron chapter, and crossed over on April 1, 1972. He along with his fraternity brothers, helped charter the Omicron Delta Lambda chapter in1985. He has remained an active and spirited member of the fraternity, influencing multiple members of his family to continue in this legacy. Stephen was a natural-born leader and story teller who would have you wrapped up in a tale before you realized you were a part of the conversation. No experience or memory went without an elaborate beginning middle and end. A tendency toward hyperbole. he could spin a tall retake, so convincingly he would have you believe things you knew to be false. If confronted with fact checking. he would reply, "But it sounded good! Right? He had one of the sharpest memories, and even in the hardest years of fighting his dementia he never forgot a name, face or birthday. In his final months, love was poured into Stephen, and he passed knowing his family and friends were there continue his legacy. Stephen's mother Martha L. Burwell preceded him in death. He is survived by his child, his daughter, Dionne Ja-Lin Stephenson. eldest of his six siblings, he leaves to mourn: Karen Morris, Gerald Burwell, Margret Burwell, Linda Barber, Tahira, and Deborah Owens. He also joins the noblemen of Alpha Phi Alpha Fraternity, Incorporated that have transitioned to the Omega Chapter. he leaves behind a large and loving family close to friends, former co-workers , fraternity brothers, and his only child and daughter to keep his flame lit.

Stephen Vernon Stephenson, The Wiz was a loving, caring, and thoughtful brother, father, and friend that left this world too soon on February 25th, 2021, at the young age of 65. He passed away peacefully in his hometown of Philadelphia,... View Obituary & Service Information

Stephen Vernon Stephenson, The Wiz was a loving, caring, and...

Send flowers to the Stephenson family.